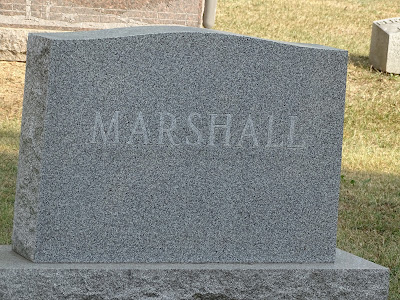 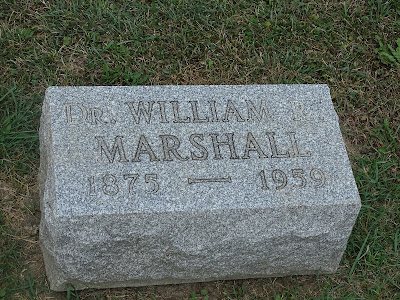 Dr. William Riddle (Doc) Marshall was born on September 22, 1875 in Butler, Pennsylvania. Marshall graduated from Slippery Rock Normal College in Slippery Rock, Pennsylvania where he earned his teaching degree. After graduating, he worked as a school teacher. Two years later, Doc went to work for the Carnegie Steel Company.

Doc Marshall made his Major League debut on April 15, 1904 at the age of 28. He played for six teams between 1904 and 1909: Philadelphia Phillies, New York Giants, Boston Beaneaters, St. Louis Cardinals (1906-08), Chicago Cubs, and Brooklyn Superbas. He served these teams as a catcher, first baseman, second baseman, and outfielder. Marshall's lifetime .210 batting average and .960 fielding percentage place him at 0.2 wins above replacement.

In 1909, coincidentally Marshall's last year in professional baseball, Doc graduated from the Chicago College of Medicine and Surgery. He moved to Clinton in 1913 and opened a medical practice. In addition, he was active in several professional and civic organizations including: the YMCA board of directors, the Chamber of Commerce board of directors, and the Illinois State Medical Society. Marshall served as the Vice-President of the DeWitt County Tuberculosis Association, President of  the DeWitt County Medical Association, and Secretary (26 years) of the DeWitt County Medical Association.

Doc passed away on December 12, 1959. Services were held at Pullen-Boos Chapel in Clinton, Illinois. He was laid to rest in Woodlawn Cemetery.
Posted by Unknown at 12:00 AM 1 comment: 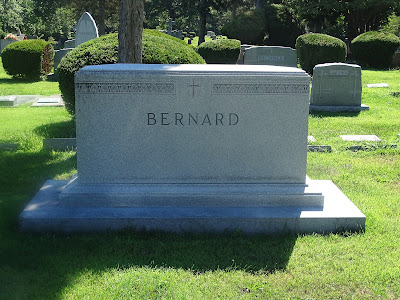 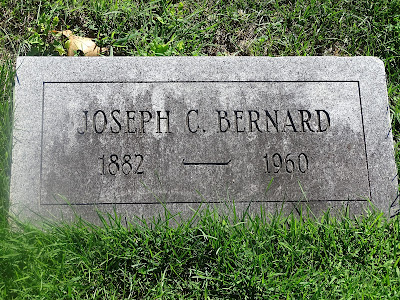 Joseph Carl (J.C.) Bernard was born on March 24, 1882 in Brighton, Illinois. On September 23, 1909, he pitched one inning of one game for the St. Louis Cardinals. Joe walked two batters and gave up a hit, but allowed no runs to score. He struck out two of the six batters that he faced in the inning.

Although Joe didn't find much success on the baseball field, he did find it as an investment banker. He owned the Bernard Investment Company in Springfield, Illinois for over fifty years. In addition, Mr. Bernard was quite active in the Springfield community. He was a member of several professional and community organizations, including: the Illinois Association of Insurance Agents, the Springfield Association of Agents, the Holy Name Society of the Blessed Sacrament Church, and the Knights of Columbus Council 364. Joe was also a member of the prestigious Sangamo Club, a private dining club that serves Springfield's most respected business, community, and government leaders.

Joe passed from this world on September 22, 1960, nearly fifty-one years to the day after his Major League debut. He was laid to rest in Calvary Cemetery in Springfield, Illinois.

On this edition of Mail Day, we bring you a couple more Listia finds. These arrived in the bird box courtesy of SultanofSleaze. They were offered at a price we couldn't refuse. What can we say? We're suckers for 63s. 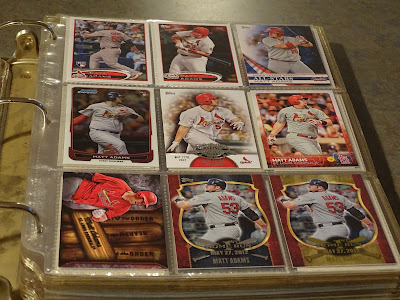 Matt was selected by the Cardinals in the 23rd round of the 2009 draft (699th overall). He spent 3 years in the Cardinals farm system before being called up by the big club.


Matt was a much anticipated prospect. The word coming out of the Minor Leagues was that Matt had a big bat and also hit for average. It was good news since, in 2012, the Cardinals core group of players were beginning to show their ages.

On May 27, 2012, "Big City" hit his first major league home run. It came in the bottom of the sixth inning. Chad Quall was on the mound for the Philadelphia Phillies. Matt went 2-for-4 in the game with a home run and a double. The Cardinals won the game, 8-3.

Matt registered only 48 at-bats in 31 games with the Cardinals in 2017. During that time, he hit .292 with one home run, seven runs batted in, and four runs scored.

On May 20, 2017 (exactly five years after playing his first game as a Cardinal), Adams was traded to the Atlanta Braves. It's a bittersweet parting because he never received enough playing time to show his full potential as a Cardinal. With limited playing time in St. Louis, it was the best that could possibly happen for him. The Cardinals also gave up some cash and received first baseman Juan Yepez. Most (sane) Cardinals fans believe it wasn't nearly enough, but with Adams' contract set to expire at least the Cardinals received something in return. 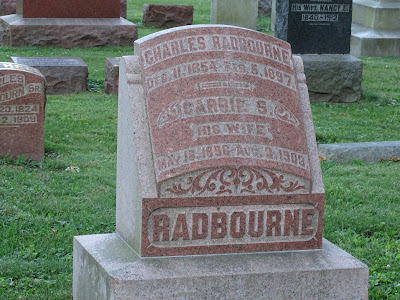 We know Old Hoss Radbourne was never a Cardinal, or a Brown or Perfecto for that matter, but when a member of the National Baseball Hall of Fame (1939 inductee) is practically buried in your back yard, it deserves some mention.

Old Hoss Radbourn was born on December 11, 1854 in Rochester, New York to Charles Radbourn and Caroline (Gardner) Radbourn. According to Brian McKenna and acknowledged by the Society for American Baseball Research(SABR), Charles and Caroline moved their family to Martin, Illinois (McLean County) in 1855. Old Hoss attended school in Bloomington, IL and strengthened his arm by throwing a baseball against the side of his family's barn.

Radbourne played for five Major League teams over the course of twelve seasons: the Buffalo Bisons, the Providence Grays, the Boston Beaneaters, the Boston Red Stockings, and the Cincinnati Reds. During the course of his career, he amassed a record of 309 wins, 195 losses, and a 2.67 ERA. In addition, he holds the record for most wins by a pitcher in a single season (1884). There is some conflict regarding the actual number of wins that Radbourne achieved in 1884; McMillan's Baseball Almanac reports 60 wins for Radbourn in 1884, the online Baseball Almanac credits him with only 59 wins in 1884, and a sign placed at his grave site in 1940 (seen below) mentions Old Hoss accumulated 62 wins in 1884. 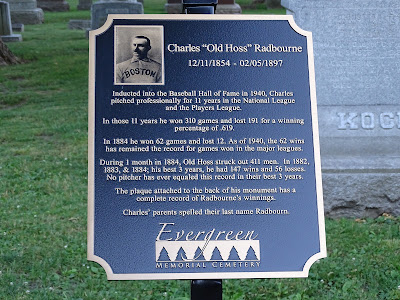 After retiring from baseball, Old Hoss returned to Bloomington, Illinois and bought a fifty-percent share in a saloon and billiard parlor that was located in the basement of the Windsor Hotel that sat at 214 W. Washington Street.

During the last few years of his life, Radbourne fell ill. He was rumored to have contracted either syphilis or tuberculosis. All indications suggest syphilis. Carrie Radbourne, Old Hoss' wife, succumbed to the illness, as did her previous husband, Charles Stanhope. In the last year of his life, Charles Radbourne lived in a state of insanity caused by his untreated illness. He passed on from this world on February 5, 1897 and was lain to rest at Evergreen Memorial Cemetery in Bloomington, Illinois. 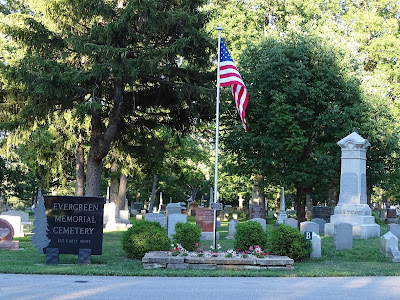 Posted by Unknown at 8:41 AM No comments:


We've been purging unwanted items via Listia over the last month. As a result, we've been looking to use our credits to bring in needed items for our collection. When it comes to Ozzie Smith, our largest player collection, it's becoming more and more difficult to find items other than autographed and memorabilia cards. When we came across the lot containing this card, we had to have it, but we didn't really want the other cards in the lot. Luckily, our plan panned out. Rather than taking a shot at winning the lot or bidding the lot up to our maximum ability, we backed off and let the user Fischman win it for half of what we were willing to bid. After it ended, we contacted him and proceeded to make an offer that he couldn't refuse. We generously offered roughly four times the credits than the card is valued. Our viewpoint: we saved a ton of credits by not going after the lot and a ton of time by not having to individually list the cards that were in it. Not to mention, the time to get an oddball card is when you finally find it. We aren't sure how we missed this sweet oddball the first time around. 1987 was the first year we collected on a serious level and food issue promos have always been favorite additions to the collection.

When the envelope came, we quickly realized that Fischman evened out the deal a bit by throwing in a couple extras. The first of which was a 2015 Donruss Mark McGwire card. Since we haven't been purchasing many new issues other than the obligatory box of birthday Topps, this card was a welcome addition to the collection.
And he didn't stop there. Fischman also threw in this beautiful offering from 2016 Diamond Kings. The vibrant colors make this an outstanding card and it's even textured like an oil on canvas. It ended up being our favorite card in the bunch.

All in all, we're very happy with the new additions. We leave you with these thoughts: Go after what you want, but be smart, honest, and fair. Everything else will work itself out.

Collect Hard!
Posted by Unknown at 12:01 AM No comments: